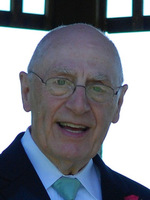 Avon, CT - Arthur Charles Chouinard of Avon, CT passed away peacefully at The Residence at Brookside, Avon, CT on Oct 23, 2020. Arthur is survived by his former wife, Sally Chouinard of Canton, CT, and their five children, John Chouinard of Bristol, CT, Mary Ellen Chouinard Beauchamp and her husband Robert Beauchamp of Berlin, MA, Paul Chouinard and his wife Clara of St., Johns, FL, Nancy Norander and her husband, Phil of Las Vegas NV, and Tom Chouinard and his wife Kathy, of Canton, CT. He was a loving father and grandfather and also leaves 8 grandchildren; Jarrett, Emily, Danielle, Amanda, Cole, Kayla, Kyle, and Olivia, and several nieces and nephews. He is also survived by his brother Don Chouinard of Vernon, CT. He was predeceased by his parents Art and Doris (Gaudet) Chouinard. Born and raised in Hartford, CT, Art was a graduate of Bulkeley High School and served as an artist and musician in the US Air Force Band and performed with his lifelong friends Hank Little and Jerry Pearlman.

Art was a self-employed graphic artist for most of his career, working with Conn General Corp, Aetna Insurance and Avon Country Club.

Art’s lifelong love for music, he was considered a virtuoso trombonist performing with many local bands for many years at several venues throughout CT, with such favorite band mates Nick Casciano, Lou Ball, Milton Flynn, and Charlie Rice.
As a resident of Avon, CT, Art was a member of the Avon Jaycees Softball Team sponsored by George’s Pizza of Unionville, CT.

Art was a well known and talented Farmington Valley artist and realist painter and his paintings have been on display throughout New England. Art served as a longstanding member, including a term as President, of the Avon Arts Association. Known for his realistic and detailed paintings, striking quality for accuracy and composition, his work and signature marine scenes had earned him many commendations and awards.

Art was an avid New York Yankees and New York Giants fan, and a devoted member of the St. Ann’s Church of Avon, CT.

In lieu of flowers, donations could be made to the Alzheimer’s Association.

All rights reserved. This obituary is also archived at obittree.com