To share your memory on the wall of Ruth Hart, sign in using one of the following options:

At five, Ruth and her family moved to High St. where Ruth lived until her marriage to Robert Delos Hart on April Fool’s Day 1944 in Saint John’s Church in Pine Meadow, CT where her great grandmother, grandmother, mother, two nieces, her daughter, and one granddaughter were also wed. The marriage lasted 70 years until Bob’s passing in 2014, but their relationship spanned more than 80, having met in 1932 when Bob moved to Canton. She once said that there was never a harsh word between them, and she often referred to Bob as her “boyfriend.” In 1945, they moved to Harts Corner in Canton where they stayed until moving to Avon in 1988, then to Avery Heights in 2013.

After graduating from Canton High School, Ruth headed to AIC in Springfield until being called home at the end of the year because her sister was dying and her brother was serving in the Navy. Her college career remained on hold until she attended Northwest Community College in the early 1970s, ending with Ruth proudly receiving her associate’s degree in library science. Her passion for reading and her love of the library led to being one of two women who created the Friends of the Canton Public Library in the early 1940s and working there as the children’s librarian for nearly two decades. Annually, she reread her favorite book, Marguerite Allis’ All in Good Time, a historical novel about a clockmaker in Litchfield County.

Ruth had a beautiful soprano voice, a penchant for finishing crossword puzzles and acrostics in ink, a love of reading historical fiction and non-fiction, a foolproof recipe for magnificent lasagna, a deep devotion to her Episcopalian faith, a memory like a steel trap, a love of knitting, an enduring interest in her Viering, Chapin and Hart roots, enjoyment from spending summers beginning in 1955 at Willoughby Lake, and an undying love of her grandchildren and great grandchildren who returned the love she gave.

Ruth was predeceased by her parents, her beloved Auntie Vel, her sister Sarah and brother Albert, her niece Joan Finney, her daughter Susan Hart Bahre, and her best friend of 90+ years, Ruth Wilder Gillespie. She is survived by Thomas and Daria Hart of New Hartford, and John and Kathy Hart of Springfield, VT; her grandchildren Rebecca (Molly Holder) and great grandchildren Maeve and Calvin, Rachel Hart and her family, Julie Hart (Daniel Schlaepfer), and Richard Hart and great granddaughter Rowan; son-in-law Jared and his wife Betsy Bahre; niece Marilyn Baranowskas (Joe Baranowskas); and nephews Stephen Schaefer and Robert Finney.”

The family will be forever thankful for the skill, devotion, kindness, and care provided by the entire staff of Avery Heights who made Ruth and Bob’s last years safe, comfortable, and enjoyable which comforted and reassured the family.

Ruth tested positive for COVID in May 2020. Although it will not be identified as a cause of death, the disease affected her profoundly, not only physically but mainly by dominating her last year with isolation from family and friends. Despite the concerted and compassionate efforts of all of the healthcare workers at Hartford Hospital, West Hartford Health and Rehabilitation, and Avery Heights, had our national leaders handled the pandemic with honesty, science, and courage, Ruth’s final days and months would not have been filled with isolation and loneliness.

Ruth will be buried in Dyer Cemetery in Canton overlooking Harts Corner on Saturday, May 1st at 10 am. Friends are welcome to attend the service.

Donations in Ruth’s honor may be sent to The Friends of the Canton Public Library 40 Dyer Ave. Canton, CT 06109.

The Vincent Funeral Home of Canton is caring for the arrangements. Please visit Ruth’s “Book of Memories” at www.vincentfuneralhome.com
Read Less

Posted Apr 25, 2021 at 08:23pm
Tom & Daria,
Although we will not be able to attend the service, our thoughts are with you. I remember your mother from the few visits at your homesteads growing up and at the Canton Library. Cherish the good memories and the laughs and love you enjoyed.
David & Barbara Schultz 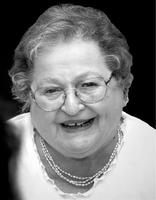